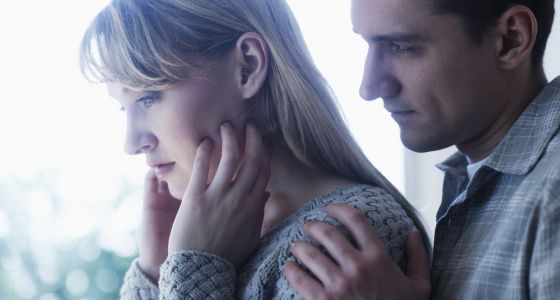 I was stuck in a failed marriage. My personal life was ruining my career. I was totally confused and unable to take a decision. As an Indian girl, I was afraid of the term ‘divorce.’ I was scared that it would spoil my reputation and my parents would be unable to face the society. Then he came into my life.

One fine morning, he just entered my branch for certain queries and we met for the first time.

He was very handsome and his looks completely swept me away. I was awestruck and fumbled like a teenager in front of him. The very first day we shared our numbers. This was his hometown but he was posted in Delhi. We worked in the same organization but at different locations. He kept contact with me even after returning back. We used to talk every night and I shared all my marital agony with him. I felt relieved as there were certain issues in my marriage which I couldn't share even with my parents but it was easy to talk to him about it.

Gradually, we became very good friends and I started consulting him on every single decision in my life.

We discussed everything on earth and had even indulged in phone sex. At times, it became completely unbearable for us to stay apart. Then one day, he proposed to me over the phone. He said that he badly needed me in his life and insisted me to end my marriage and to free myself. He promised me to marry me once I settled my legal issues with my current husband. Frankly, after that prolonged 3 years of my tedious married life, I found the courage to approach my husband for a divorce.

I suddenly found the guts to speak to my parents and face the society.

He supported me throughout the process and finally, I succeeded in getting divorced. I was very happy after a long time; I had found my true love. We made plans to meet each other and proceed with our relationship. It was at this juncture that his mother was diagnosed with cancer. Since he had lost his father at a very early stage, his mother was everything for him. He told me to wait for some time as this was not the right time to disclose our relationship to his mother. Since he was the only son, his mother would never accept his relationship with a divorcee. So he needed some time to explain the matter to her.

I had recently come out from a failed marriage and I needed some time to settle. So I gladly accepted as I knew my love was there with me. But I was wrong.

His mother's condition started deteriorating and the doctor had advised him to shift her to his hometown where she could spend time with her relatives and friends. Since he couldn't get a transfer immediately, he shifted his mother and stayed alone in Delhi. This was a great opportunity for us to take our love to the next level. We decided to meet. I travelled the entire way to Delhi alone and was super excited to meet him.

Since our relationship started, this was the first opportunity for us to meet in a proper way and spend quality time together.

I lied to my parents that I was on an official trip. I reached the airport and he came down to receive me. We spent the whole evening together in movie halls and shopping malls. We were like those teenage lovers, hugging each other in public. We even exchanged few smooches in the movie hall as we couldn’t resist. He finally took me to his house and I stayed there for whole two nights. It was the happiest moment in my life. We cooked and took shower together, we even had sex. We made love the whole day.

He was so passionate that I simply went head over heels for him.

He made me feel like the prettiest woman on earth. Those two nights were like the Mills and Boon story for me. I felt proud to have him in my life then. He even said that I was the first woman with whom he had lost his virginity.

He promised that he would convince his mother and marry me. For him, it was next to impossible to leave me. But once he dropped me back to my hotel, he changed. He stopped taking my calls and once I returned back home, he completely disappeared. I heard from his colleagues that he got a transfer. We were in the same city but we didn't meet. All promises were lost. He sent a message via one friend that he can’t marry a divorcee as this thought could kill his ailing mother. Hence, he got engaged to his college friend.

If this was the case, then why did he come into my life? Why did he give me colorful pictures about our future together?

I never got any answers. I cried and did everything to get him back but all in vain. He simply erased me from his life. It was evident that he only wanted sex from me. I heard rumors within the organization that he was a Casanova who enjoyed sleeping with girls. So finally, I had to surrender. My love was lost and I had to settle down. So I married the man whom my parents chose for me. He was a nice fellow and I should admit that I was happily married with a child.

But after two years of my second marriage, suddenly he appeared again. I received a text message from him stating that he wanted to meet me. Out of sheer curiosity and also my ex-love, I called up the number. It was again that familiar voice which was once my lifeline. He called to inform me that his mom was dead and so now he was free to be all mine. He again gave me the option to leave everything and be his forever. I was moved and agreed to meet him. We met and let me tell you, he still had that appealing personality.

I again felt that old love for him. It was simply irresistible. But then he said that he was married too and my conscience hit me. He married that lady because she was her mother’s choice and now that his mother was dead, he was ready to leave her for me. How can I ruin her life for this bugger? I am glad that I stopped myself from committing the same mistake again. God saved me.

I was going to do injustice to my husband and my kid who loved me unconditionally.

I learnt one lesson from my own life. Marry the person who loves you, not the one whom you love. This is the secret of a happy married life. So my family saved me this time. I understood that what I felt for that guy was lust and not love. Love is what I feel now for my husband, my life partner, a father to my kids, and my soulmate.

I Grew Up With A 'Manufacturing Defect' On My Face Since 9 Years Of Age; This Is How I Changed My Story

Dear Baby, If I Die Tomorrow You Should Know The Truth Of Your Mother's Life