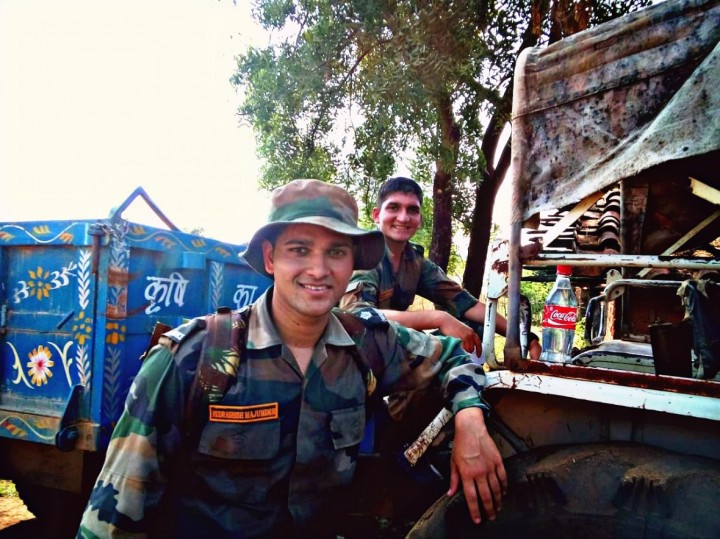 Our lives become suspenseful because we never know what will happen in the next moment. I was a lieutenant, and I am glad that during my seven years of service in the Indian Army, I did not lose any men under my command. When you are concerned about other people, you forget about yourself. Army people are selfless. Army training is so unique that it instils faith and confidence in you while also teaching you the fundamental meaning of life. Ordinary people get furious over little matters, but when you join the Army, you realise the importance of life and that there is much more to life than petty battles. One should introspect, retrospect, and contemplate to live life happily.

My journey in the Indian Army began when I appeared for an all-India examination for RIMC, Dehradun, and got selected from the state of West Bengal at the age of 12 years. After clearing the exam, I made my way to the Rashtriya Indian Military College (RIMC). My training for getting into the National Defence Academy (NDA) began here. We were trained, nurtured, and taught the core values every army personnel should possess.

I worked hard day and night and practised a lot, but I failed to pass the NDA exam on my first attempt.

I flunked the written examination. I didn't lose hope and started working on my weak points again from scratch, with only 18 days left for my next attempt. I remember studying 18 to 20 hours a day. Finally, I cleared the written exam, SSB (services selection board), and medical examinations and came 33rd in the merit list across India. I was thrilled to enter my dream world. Finally, my journey to become an officer in the Indian Army began.

I joined the National Defence Academy (NDA) in 2007. I was awestruck! The training, the view, the vibe—everything was so mesmerising. My love and passion deepened after joining the NDA because the environment was so motivating, especially because I've always enjoyed challenging situations. The way this academy turns an ordinary individual into an invincible, disciplined, and punctual person is purely magical. After joining NDA, I became determined to achieve something bigger in life.

My training began on day one. It was rigorous training, but I knew the basics, so I could get through the initial phase. One thing to remember is that regardless of where you come from, if you have zeal and love for your country, you will become the best version of yourself and a true fighter in the future. Always have faith and trust your intuition.

Our seniors oversaw our daily training and used to punish us severely for poor performance and indiscipline. Our batch at NDA was one of the most notorious of all. We used to break almost every rule, and on many occasions, we got punished for months. But we still had a lot of fun during our training.

One day we accomplished the most daring mission, which came out of our curiosity.

We stole our seniors' cold coffee, which is obviously a criminal offence in the NDA. It was a direct challenge and threat to the authority of the seniors, and yes, for the next few days left before we went home, there were nightmares, and in those days and sleepless nights, we only prayed for the term to get over so that we could go home.

During my training, I adopted a dog. We were not permitted to keep dogs. I sheltered the dog secretly. Later, I was caught red-handed by my training officer, and they took him away from me; however, I was relieved that he was in a safe shelter. I got stationed on the outskirts of the NDA, subjected to daily restrictions (official punishment).

We had challenging camps—probably the toughest ones that tested our limits and showed us how far we could go. Everyone gave their all to win the competition, and the experience was unforgettable. I had fun in my dream world, learned a lot of new things, and formed genuine friendships. Those three years gave me some of my finest memories.

Finally, the tenure of my NDA training came to an end. What a privilege it was to be a part of something that made saying goodbye so difficult.

As we say, "every ending has a new beginning."

My training at the NDA was completed in 2010, after which I went to the Indian Military Academy for further training. After one year of rigorous training, on June 11, 2011, I was commissioned into the Indian Army. It was a proud moment for me as my parents removed flaps from my uniform and put stars on it.

My first duty assignment was to Kashmir, where an infantry regiment welcomed me. During dinner, they did certain things to test me, so it was an ultimate experience. The vibe at the unit was lively. I was overwhelmed with the sense of patriotism, love for one another, and, most significantly, love for our country.

My tenure in Kashmir was both adverse and rewarding. I encountered various challenges that were rewarding for me. Machhil and Jhangar sectors are two of the most heavily infiltrated areas in Kashmir. I am glad to be a part of such missions. My time in Kashmir was a thrilling yet incredible experience that I will never forget, and I am grateful to have been a part of it.

However, one thing I had to adjust to while serving in the Indian Army was the inconsistent schedule. There is no fixed routine; you can be called anytime for training or various tasks. My sleep pattern was disturbed while I was in Kashmir. I was up all night, even though I used to sleep only 3–4 hours during the day, as the threat of infiltration and cross-border firing lurked at night. I served there for 2.5 years. After my tenure in Kashmir got over, I returned to a semi-field area in West Bengal, and I again had to adapt to another sleep schedule. The Army teaches you to adapt to different situations; that's what makes it special.

Self-belief, facing challenges happily and confidently, and problem-solving skills are the major skills I've acquired by being part of the Indian Army.

"You are not the first, and you will never be the last to do anything," says the Indian Army.

It is more than a line; it is an emotion that propels you to overcome adversity. We, 'faujis,' live in the moment because we don't know what will happen in the next minute. We never worry about what will happen tomorrow; we enjoy the present.

I served in the Indian Army until July 7, 2018. I took voluntary retirement as a major.

After my retirement, I came to Mumbai. It was hard to manage my expenses initially. I lived in a PG where 8–9 people were already staying. Life became difficult, but since I was an army person, I was trained to embrace the challenges because, without obstacles, life is bland. I enjoy taking on new challenges, so I accepted and later overcame that phase. I used to get one meal every day from Gurudwara because I knew I had limited funds to cover my expenses, but with time, I learned to manage everything positively. This is what the Indian Army has blessed me with, for which I'll always be thankful.

I miss our group, my bond with them, the games we played, the facilities we received, and the connection we shared. One thing I am glad to have left behind is regularly shaving our beards. We were supposed to wake up early at 5 a.m. and shave our beards regularly.

The bonding between your teammates, your group, and your seniors cannot be defined or replaced. The feeling is special; only those in the Indian Army could get it. One may purchase the best of all things in this universe with money, but one cannot get exposure to Army life and the enthralling journey unless he makes it into it. I'm glad to serve my nation and fulfil my father's dream. Those 16 years will be the most cherishable years of my life, but as I always say, I will live as Rudrashish Majumder only once, and in this life, I want to try and do everything I wish to.

Hence, my new journey in Bollywood began, and I'm slowly getting there as an actor.

I have performed in movies like Chhichhore, Jersey (a Bollywood remake), and a web series (Avrodh Season 2). I have received a lot of love from people for my acting skills. I wish everyone would continue to show their affection, support my endeavours, and keep an eye out for my upcoming Bollywood films with larger characters.

Hoping to make a mark in this industry, after all, "excellence is not an act, but just a habit."