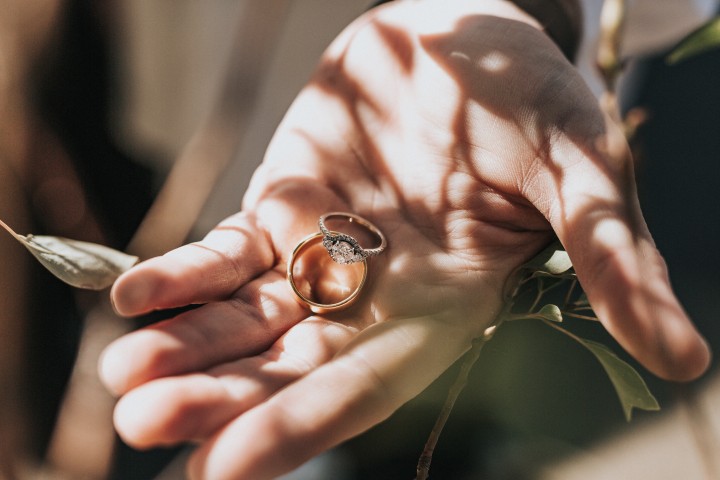 May 2, 2019. The day we first met. Two anxious strangers sent, rather pushed by their respective parents, who happen to be schoolmates, to meet over a cup of coffee.

I reach the agreed-upon venue on time and waited for him in the hotel lobby nervously. Let me mention, I am a teacher by profession and punctuality is a part of my personality. I have always had an aversion for people who do not value the time of others. He finally arrived 40 minutes late, wearing a pink shirt and looking extremely handsome.

Although my level of impatience at that time was at its peak, I managed to conceal that in front of him. After exchanging greetings, he asked me to come for a drive with him. I nervously followed him and asked him what we were going to do, he said  - “Gurudwara”. So, he drove me to Moti Bagh gurudwara where we sought blessings of dear God.

The start itself was too beautiful and divine. Not to forget, he had brought a “polybag” full of chocolates (from Krishna Store ) for me, which he gave me in the car. He had hit just the right spot since I’m a person who can literally survive on just chocolates. We headed back to the hotel where we finally start conversing and discussing our likes, dislikes, school and college times, and lots of other things.

I’m the one who was doing 90% of the talking and he was silently listening. I finally asked him - “don’t you have any questions to ask?” followed by “I hope you are not under any kind of pressure." Imagine a girl asking this to a guy.

We finally wounded up our meeting and headed out in our respective cars. Since it was late in the evening, through the way he followed my car and stayed in touch with me over the phone, and finally, we said our goodbyes and disconnected the call.

I think in my mind, he was next level courteous and sweet. By the end of the day, the only thing that came to my mind was that - “WE’RE POLES APART “. And I was totally confused as to whether to meet and speak to him again or not. In fact, we were both unsure about it.

But God made sure that after that day, we did a lot of texting, met two more times before finally saying yes to each other 15 days after our first meeting.

He said “yes” first and somehow this automatically made me say yes too, without giving it any second thought. It was some divine intervention that made me do that because I just did not go to meet him that day with the intention of spending the rest of my life with him.

That day is still afresh in my memories and today, a year later, I can say that he is the best thing that has happened to me.

Along with my soulmate, I’ve also been blessed with another set of parents and a family that is too welcoming and amazing in every aspect.