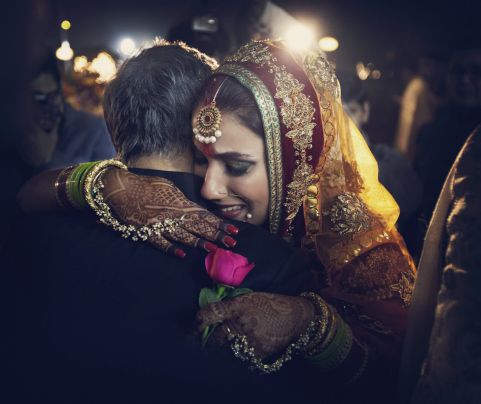 It's 3 a.m. I have a cup of coffee by my bedside, half empty. It's not warm enough anymore but I think I'm going to have it anyway. In fact, I think I am going to have one more. I'm sitting up thinking. Wondering. Marriages, I was told, are made in heaven. Why then am I in doubt? Honestly, even Caffeine isn't helping and this kind of situation is rare.

I'm having a hard time choosing what to believe.

That thing about marriage and heaven or the other 'truth' that implies that mistakes don't exist in heaven. Both cannot coexist. It's either one or the other. If I am to believe that really no mistakes exist in heaven (not implying that it's a belief I actually hold), then marriages are most definitely made on Earth. Such a flawed concept could only be a creation of the mankind.

Recently married, I'm still trying to understand some norms and behaviours that most 'seasoned' married women this side have come to terms with. I'm having trouble swallowing those realities, let alone accepting them. From what I've seen, I've realised this one thing:

Marriage is an unfair contract, almost to the point of bonded labour, where the woman appears to be the publicly accepted 'loser' in all sense of the word.

She's expected to devote time to every member and when there's a family decision to be taken, she's very conveniently 'still new to the family'. She's expected to report daily to his mother, make an attempt to nurture relationships with every member because, you know, she's 'still new' and the whole family can't come to her — instead, it's more efficient if she chases twenty people around.

It's the 'S' in the She that makes all the difference.

His sister still wants to have her share of hold over her brother, so the mother-sister duo decide what he does, what he eats and even what he wears! In the midst of the sister's jealousy and mother's uncontrollable urge to keep her son in her pocket, the son's undying (almost blinding) affection for the two,

the woman in the marriage is left with no choice but to accept it all if she wants her marriage to last.

If all his problems, his desires, his needs, his discussions are for his mother and sister to share, please remind me what the wife is there for? To cook so he eats healthy? To ensure his clothes are clean, his house is taken care of and his 'other' needs are met? Get him a maid instead!

Oh wait, the wife does it for free!

Now, logically speaking, I'd think if these apply to the woman, the very same load of s*** should apply to the man too, shouldn't it? The man is exempted from all these duties because he's the 'man' and the man doesn't bend (how that helps in nurturing relations with your wife's family, I fail to understand). He will visit her family only when invited and re-invited (basically begged to) but she should chase his family for a damn phone call.

Don't get this wrong: the woman is supposed to bend, clearly, only when she's the wife.

Sometimes, I think, she might want to choke on her decision to marry in the first place. Poor girl was unaware, lost in the thoughts of new clothes, make-up and pretty pictures. And even though her mother probably knew what she was pushing her daughter towards, she wanted to look out for her by keeping her blinded.

As soon as the 'poor girl' was married off and she began to realise these things and questioned all the married people who expressed their joy over her decision to get married, they responded like it's the most normal thing in the world.

I cannot get used to this. I will respect his family only as much as he respects mine. I will make only as much of an attempt with his family as he makes with mine. I will not make an effort with anybody who disrespects me. I will only care as much as I am cared for. If my opinions or I am taken to be unimportant, I will become invisible. I will be cordial; I won't be rude until I can't tolerate it anymore. But after a line is crossed, I will walk off and never look back again.

If that means the end of this marriage — so be it. It was never worth the effort in the first place.

No family is more important than the one that has sacrificed all its happiness, needs and desires to fulfil each of mine (certainly not one that demands the sacrifice of my own family).

No relationship is more important than my dignity. No marriage is necessary if I'm not one of the two most important people in it, the other being the one I married. I will grab the broken pieces of my life and walk away, and someday, I'll be whole again.

A concept as unjust as this one couldn't have been made in Heaven. If it was, I refuse to believe in the existence of this unfair world called Heaven.

Time for another coffee.

Until I decide to be on the other side.