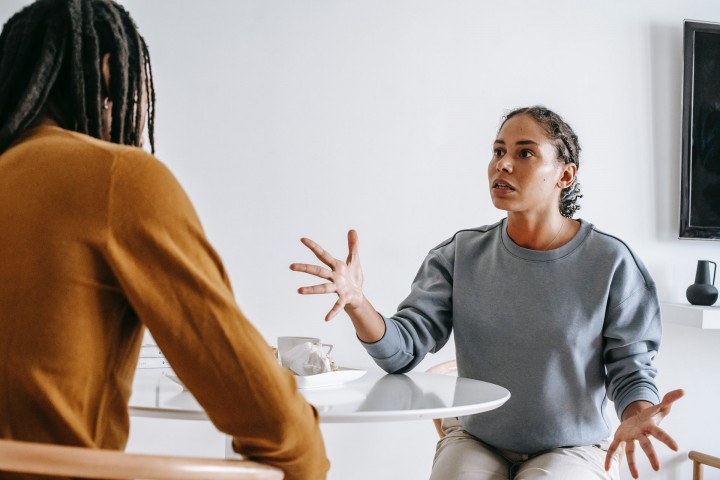 I have just one younger brother. In his childhood, he was chosen to greet a former politician, which increased his importance in our family members. A boy is always especial and is treated with love and tenderness.

He was not very good in studies while I was an above average student. He was naughty and got into a lot of problems with his school mates. He was quite popular with girls too.

One day, I found an adult magazine in his room. I showed it to my parents. He got a scolding. Another day, my mother found him smooching a girl in our colony's playground. She took him to task. We did not know at the time but these things left an indelible impression on his young mind.

Now, when I look back, I realize he always wanted to take things from me. He used to take away my birthday presents or things that he liked. My mother used to always tell me that since I am the elder one, I should be the generous one. Ever since, he has always remained the younger one in the family.

Whenever he wanted something, he would just fall on the floor and start crying. Ultimately, my parents relented to most of his demands. I had an arranged marriage. I was the eldest in the family and hence there was a lot of pressure to marry me off. My husband got a heart attack on our honeymoon. I did not know at the time but he was an alcoholic and a chain smoker. My father who is a doctor got him admitted into a hospital and he underwent angioplasty. He soon recovered and came back home.

My in-laws blamed his entire problems on my stars and started demanding more money from my parents. After sometime, my brother revealed that he had a girlfriend whom he planned to marry. The girl was from a different community. At that time, inter-community marriages were unheard of in our family. My parents initially opposed the idea because my father wanted him to marry a girl from our community. But then my brother threatened my father that he would commit suicide. My father, out of his love agreed.

They got married. I kind of got along with my brother's wife. She was a quiet girl who was very observant. Initially all was well between them but then my brother and his wife started fighting. At that time, they lived with my parents who pacified them and things were fine. My brother had a habit of spending on credit cards which was disliked by his wife. My father kept paying off his loans.

Meanwhile, I was trying to make my marriage work and decided to have a child. I thought that having a child would help my husband who was a mama's boy to realize his responsibilities. When I was pregnant, my sister-in-law, who worked in the same office as me brought me freshly cooked home food from my mother because my mother-in-law started giving me stale food. She always kept telling me that it was too soon to have a baby. My husband was some what happy.

I decided to go to my father's place for delivery since he was going to be transferred to a hospital in a different state. We soon moved to the new home and I delivered my baby there. I went back to my in-laws' place after a while but realized that nothing had changed. I decided to move out because the fights had increased and I did not want my baby to grow up in such an environment.

My father and my grand mother told me to come home. After a while, my husband passed away due to a heart attack. I never went back to my in laws' house. Meanwhile, my brother's marriage was showing cracks because of his hot temper. My sister-in-law went away to a new city for a two-year course.

Meanwhile, my brother who was living alone in the house got too friendly with a girl who was having her own marital problems. When my sister-in-law came back, she found out about the affair. My brother apologised but continued his hot tempered attitude. His temper and indiscipline cost him his job at the company. He then started a business of his own where he and his wife took loans.

He splurged a lot of money while the business was not doing that well. Soon, his wife who had become very lonely since he spent all his time in his new office decided to leave him. We tried to stop her but she could no longer live with him. The divorce was soon finalized. At the time, my brother was living alone in our family home.

Soon, he befriended another girl and they decided to live in. When my father went to visit him, he got a shock of his life when the girl asked him who he was. After ten months, the girl's parents met my parents. They wanted the two of them to get married. My parents had no choice. The marriage took place.

After three months, cracks started appearing in this marriage too. My brother and his new wife were both hot-headed individuals. His long hours in his office, lack of money, spending habits took a toll on his marriage. My father kept giving my brother money to support him but my brother kept wasting it.

He befriended another girl who helped him to pay off some of his loans. After ten months, his wife left him and went back to her parents' place. Two months later, she filed a police complaint accusing our entire family of harassing her for dowry. The divorce was settled for a huge amount which my brother settled with the help of his new girl friend who had got a PR in Australia.

During the pandemic, his girlfriend moved in with him and they kept fighting the entire time. However, now my brother wants to get married to her because he wants to go to Canada with her. We have no idea whether this marriage will stay or end up in a divorce because his new girlfriend is also as hot headed as him. I have no idea what to say to him.

To my brother, his family is his worst enemy. Despite my father helping him with lakhs and lakhs of rupees, my brother is not grateful to his parents because he believes that they love me more and have given me more than him. My father has supported him with money for the last 7 years and yet he feels that they have supported me more.

I am living with my daughter and my parents while my brother and his girlfriend live in another city in a house that is bought by my parents. Today, I don't have a job due to the pandemic for the last seven months. This is the first time I have asked my parents for support but my brother does not like it because he feels its his right to ask his parents for money and not mine.

He has been studying various courses for the last 7 years and has wasted my parents' hard earned money but he feels I am the one who is the dependent one. He calls my parents all sorts of names, insults them and yet wants them to give him their entire hard earned money. Can any one tell me what to do?

Correcting your child is as important as unconditionally loving them in their growing up years. Share the story to help the writer find a way out through your suggestions.