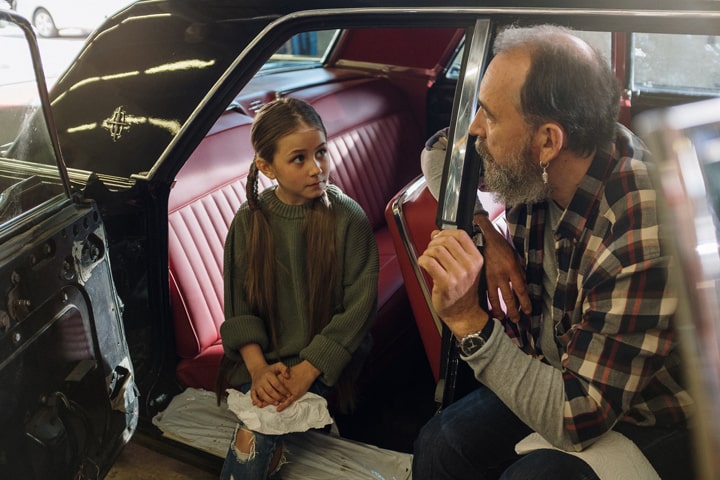 It all started when I was 10 year old. I saw my dad hitting my mom right in front of my grandmother (my dad's mom). She would just stand there doing nothing.

I can't seem to remember most of my childhood but all I know is, it was the worst part of my life. I still can't forget that one day. Blood was flowing from my mom's nose and lips just because she was doing her job and according to my dad and grandmother, she was a housewife and was only supposed to take care of her children and husband. Now I realize, that my dad has always been abusive towards mom and us.

After 1 year from that time, he stopped hitting her because my mom's family threatened him and was all ready to get my mom divorced. But he begged my mom to not leave him. Actually, he is a handicap. He lost one half of his left leg in an accident. My mom took care of him day and night. Whereas all his family did was, show some pity and carried on with their lives, my mom stayed on and looked after him.

After that, since he couldn't abuse my mom anymore, he started beating me and my younger sister, just to let his frustration out. I grew up thinking this was normal. That all fathers beat their daughters mercilessly when they couldn't get A+ in all subjects. I had always been pretty good in studies. But when I turned 12, I just couldn't take it anymore. He never praised my drawing , my efforts in my studies.

Once I just said if he would speak in such abusive language with my mom, I'll do the same with him. He started crying and complained about how I disrespected him. He told me that I wasn't a good daughter. He always argued with me because I didn't like his thinking and culture and I didn't agree with them.

We still live together but I don't talk to him much. I never leave my room. I regret not being able to save my mom. My mom is more educated than him and he is jealous about it. I really feel sorry for my mom. He always puts his mom and sister above us.

Once his sister's son tried to touch me inappropriately in front of him when I was 11 and he said that he is just messing around with me. When that person was literally 15 years older than me. Another time the same guy even tried to peek at my mom while she was in shower. When my mom confronted him in front of everyone, my dad didn't take a stand for her. Instead, defended his sister's son and then told my mom in private that he believed her but didn't want to make an issue since it was just a SMALL thing. He didn't want his sister to be ashamed.

Once we were attending a family wedding and that same person kept commenting on the way I looked and told me I was ugly. I was just 13 so I said the same thing back to him. Everyone was there when he was commenting and no one said anything. But, when I said that he is such an miserable person, everyone turned to me and he became upset like a kid and everyone including my dad blamed me and said that I ruined everyone's mood! Only my mom stood by me.

All he cares about is his mom and sister. He loves everyone excluding his own wife and children. I hate him!

You broke me dad. Now I hate everyone around me. You became the first man to break my heart before any boy could. Now, I'm afraid to even be in love or get married with anyone because of you .

Why do men in our society continue to live and behave like an entitled species? Why do so many women grow up with such unfortunate narratives? Share this story and help people understand how their behavior can affect the children they are raising.