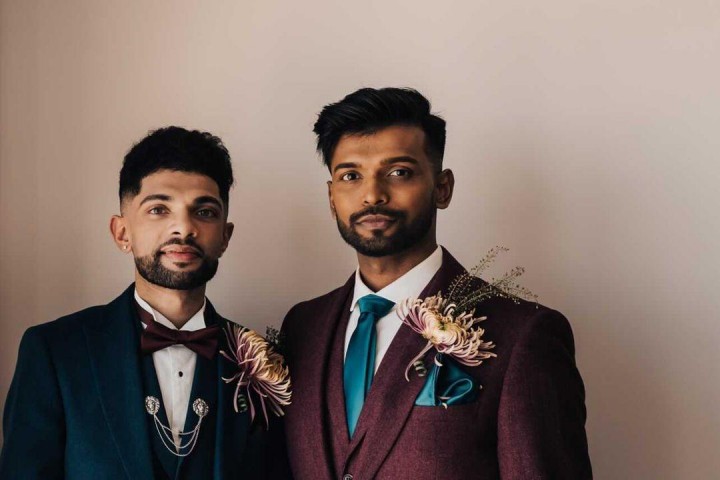 I grew up in Qatar but soon moved to the UK for my bachelors in 2014 at the age of 18. It was only then that I realized who I was and accepted myself for being gay. No more lies, doubts, self-loathing, or feeling guilty for being religious and loving men. As a Mangalorean-Indian boy, coming out at 19 was a huge shock and disappointment to my parents. It caused a lot of mental trauma and turmoil in them.

I was taken to a doctor in India to see if I could be ‘cured’. Thankfully, the doctor did not try to cure me, but he also did not tell my parents that it is normal to be gay.

When I got my first job in the UK at 22, I mustered the confidence to stand up to my parents and be open about myself. It was not easy. It was as if my parents buried my story deep and were hoping for me to be straight.

But, after lots of heated talks, arguments, counseling from parents of gay kids, my parents learned to accept my ways although keeping it to themselves. My partner Sugith and I decided to form a civil partnership, and I wanted my parents to be in the UK to experience it.

I invited my parents to come to live in the UK with us in December 202O. My intention of having them in the UK was to see us (my partner and I) living our lives as ‘normally’ as any straight couple. I wanted my parents to change their mindset after seeing us, but it wasn’t the result I was expecting. They did say that they will tell everyone in a few years when people ask why I wasn’t getting married. I knew that they were still afraid of what society would say. The worst thing was that my parents failed to acknowledge my partner even though they got along well with us here in the UK.

This year, the 25th of March, was the scariest and most contemplated day of my life. After years of feeling suffocated, breathless, watching my partner getting ignored, I had to take a stand!

It takes a lot of courage to go against your parents’ wishes coming from an Indian background. All of this led me to post my coming out story on Facebook. My heart was in my mouth because of all the consequences that I might face- my parents and their rejection, their belief in me, the tension that I would cause them.

My parents did not like what I did and, we argued a lot, exchanged awful words, and silence fell in the house that morning. However, the post started filling up with many supportive comments from my cousins, friends, a few uncles, and aunties. Our family friends were so supportive, and I was deeply touched, empowered, and emotional to see so much love. It got me thinking that it is not just me but my parents too who need the support and acceptance of others around.

Today, Sugith and I are in a Civil Partnership, formed on the 23rd of April 2021. My parents do not care about society anymore and fearlessly fight with others for me. They have accepted Sugith and his family as part of ours.

Lastly, I would say that whoever wants to be educated and are willing to listen to me, I can happily talk to them to make them understand what it is like to be part of LGBTQ+ society. Education, love, and acceptance is the key. It takes loads of courage to be who you want to be.

When circumstances are hard both for yourself and your family, do not give up, believe in who you are, and fight for your happiness and truth. Join hands and seek support! Find your wings, love yourselves!

Parents want their children to be happy, healthy, and safe. If your child comes out to you as LGBTQ (lesbian, gay, bisexual, transgender, or queer), that may or may not be something you imagined or feel prepared for—but your acceptance really matters to their health and safety.

Here's The Story A Woman You Know Is Hiding From You