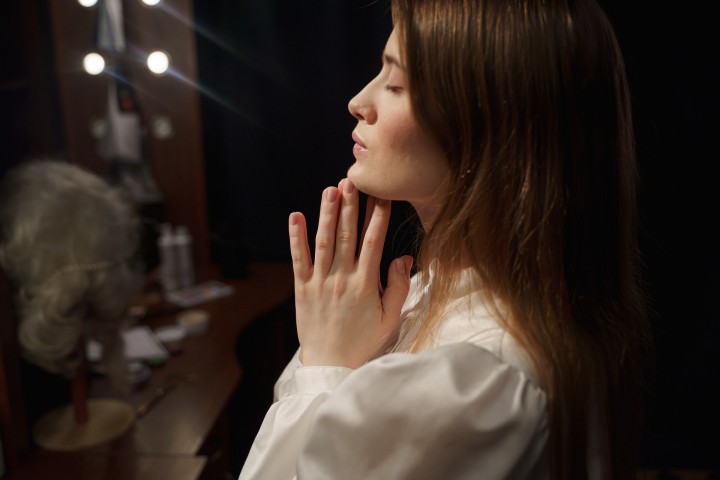 Seeing her parents splitting up at an early age was never too easy for her to accept. She had always sensed an indifference from the rest of the world. There were nights worse than nightmares where she had been a witness to her mother who was beaten incessantly and all she could do was protect with her little hands.

All she knew was, she had been the only strength to her mother – the one who brought her into the beautiful world, held her hand when she took her first step and taught her how to be brave enough to face any situation and cherish the beauty of life in every way.

Aahana, her mother named her, which meant angel. Her mother had nurtured her just like her name. Every morning, while dressing up for school she used to look into the mirror, wait for her mother to come, stand next to her and place a kiss upon her cheeks. She had inherited grace, those light brown eyes, simplicity, and a charismatic charm from her mother.

That morning the duo stood in front of the mirror and it was a perfect blend of light and shadow that the sunlight that hit the mirror’s edge, faded. Packing her bags and lunchbox, her mother sent her to school and wished her luck as she had her English test.

Aahana returned from school and to her surprise, she found her mother nowhere in the house. She went to her grandma’s room wailing and asked her about her mother’s whereabouts. But she got no answers. Locking up in the bathroom, she couldn’t stop shedding tears. Her eyes turned red and she was weakened.

After few hours, she woke up to the sound of the doorbell and opened the door hurriedly and gushed to find if it was her mother who had returned back. It was her dad, who wasn’t even bothered about her mother and acted normal. Within no time, she lost her calm and threw random things on the floor and asked her dad if he doesn’t get her mother back, she’d also run away. Dad paid no heed to his daughter’s actions and took her in the room and asked her to sleep.

The night turned the darkest – she did not have her mother to tell bedtime stories and give her goodnight kisses and cuddles. She couldn’t resist but cry and cry that night holding the favourite blue saree of her maa. The next morning she woke up, but this time with no hope to begin the day with. For other people in the house, the day was just like every other day but to her, not finding her world around was what she’d never ever dreamt of.

She packed her bag for the school and waited for her auto wala chacha. She didn’t talk to her friends, play or study and no one could make out what’s going on in this little girl’s mind. As soon as she heard the recess bell, she ran to the nearby provisional store which had a red coloured telephone and looked out for a rupee coin in her pocket.

However, she was too short to reach the telephone desk and she asked the shopkeeper to help her make a call. Almost breaking into tears, she gave him a chit which had her Nana’s telephone number written on it with pencil and said: “Uncle Mujhe Meri Mummy se baat Karni hai aap ye number Laga k do na please uncle.” When he informed her saying “beta ring Jaa Rahi hai, baat Karlo“, she beamed and quickly took the phone and waited impatiently for her Nana to respond.

No one responded. Within no time that happy smiling face turned to red teary-eyed face again. She walked towards the school gate and she was broken-hearted as that was her only ray of hope. Meanwhile, the shopkeeper got a call from the recently dialled number. He shouted loudly to call her but she went in. That moment she felt her heart was broken into shattered pieces and there was no way to get those mended.

She realized that no one other than her mother loved her unconditionally. When she was about to cross the road to reach out for her auto wala, she saw a lady standing under the neem tree. Coming closer to the tree, she found that it was her mother, her happiness standing there waiting for her. She ran towards her and gave the tightest hug and tears of happiness started rolling down.

Her mother took Aahana along with her and fought for her custody in the court. Seeing her mother’s struggle, fight and victory alone, Aahana had promised herself to achieve something big that her mother never recalls those dark days. All she wanted to do was to make her mother proud.

Today, she felt so contented and complete that she was finally able to give her mother a better life which she deserved.

Share this story because sometimes adversary is the greatest teacher.