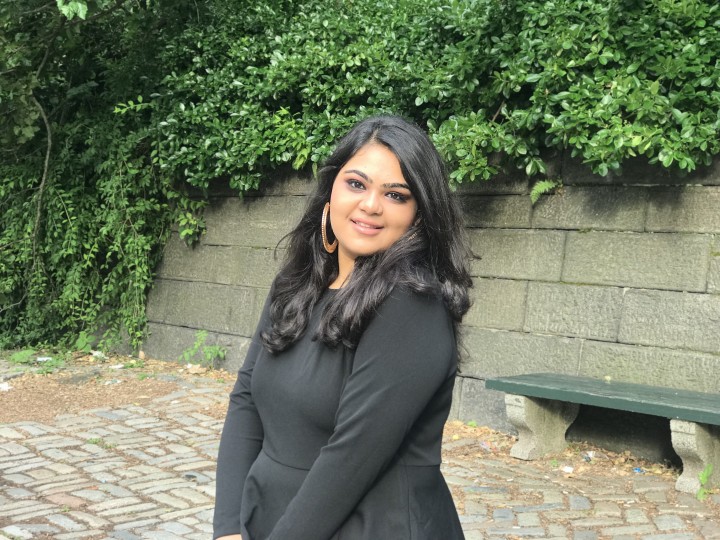 I have been singing ever since I remember. My musical journey started with playing the keyboard. I was about 4-5 years old when I’d listen to my mom play and I’d pick up some lines and play them on my own. That’s when my parents realised that I had an ear for music and bought a keyboard for myself. I used to sing alongside the keyboard soon after. I began participating in school and inter-school competitions for both keyboard playing and singing.

I was humbled to have received the title of “Adele of Mumbai” by a leading international publication.

I’ve grown up listening to maestros like Kishore Kumar, Lataji, Ashaji, Adele, Taylor Swift, Bryan Adams, Shreya Ghoshal and I look up to them as my musical idols.

I have always enjoyed singing in vernacular languages. I sing in English, Hindi, Gujarati, Punjabi, and Spanish and intend to expand the list as I move forward in my musical journey.

I have been incredibly fortunate to have received all the motivation, love, and support from my parents when it comes to my craft. As cliché as it may sound, I am who I am only and only because of them. They have always pushed me to do better, achieve all my goals, and set higher ones.

Since I was always that kid who participated in school competitions and music events, the stage has always felt like a second home to me.

I still remember the day when my parents and I were just sitting together talking and my dad says, “We should have a concert." Flabbergasted, I remember asking him “What are you talking about? Do you know how big a concert is?” I promise I thought it was a joke until it happened just a couple of months later – when I had my first solo live concert called “Rhythm” in Mumbai where I sang 51 songs in 4 languages and had a full house of music lovers in 2016. I had my second live concert “Fusion” in 2018. 2016 seemed to be the starting point in my professional musical career.

I also got the opportunity to open for Mr. Kailash Kher at his concert “Kailasa” and release my first English single War Solo in New York in the same year. Immediately after that, I also studied at Berklee College of Music, Boston, and received a part scholarship for the same. Music and marketing have always been of immense interest to me and so I chose to study both. I am the proud alumna of prestigious universities like Berklee College of Music, Harvard University, Kellogg School of Management, and NYU.

In June 2019, I was invited to be interviewed by TV Asia (USA’s) Focus Live. I sang multiple songs and spoke about my journey in music on live international television. That was a real dream come true.

My journey as a songwriter began with my first English single “War Solo” which is a part of my debut EP “Evolve: The Story of Her”. The EP comprises of three songs them being, “War Solo”, “Flame Is Gone” and “Finally Free (Libre, Libre), that connect to formulate a story. A story of a girl in love and the evolution she goes through when in love. I have also had the opportunity to be live on multiple radio stations both national and international, to name a few- Red FM, Radio Nasha, Radio One, All India Radio, Sabras Radio (UK), YaYa Diamonds DreamChasers Radio (USA), Big FM, etc.

The lockdown turned out to be a boost for my productivity and creativity and gave me the extra time to work on my music.

I wrote and released “Way Too Long”, another one of my English singles in June 2020, “Kahan Hai Tu” my first ever Hindi single in September 2020, and “Kaafi” in December 2020. All the 3 songs did very well in terms of streams and features and received a lot of love. They got me featured in The Times of India, Rolling Stones, a radio premiere on RED FM (across 36 cities), India West, Urban Asian, Mirchi Play, etc. “Kahan Hai Tu” also crossed a hundred thousand plays on Spotify.

I try to tell stories through my music, stories one can connect and heal with and I am incredibly excited about my upcoming Hindi single, 'KEH BHI DE'.

I have written, composed, and sung it while Aasha Singh has produced, mixed, and mastered the track. I originally composed the song on my keyboard, acoustically.

The song has been written and composed keeping in mind the frustration, desperation, and restlessness one feels when their lover does not accept or admit their feelings despite being in love themselves. That element of passion yet frustration in the music was brought on by drums, piano, and strings.

The song releases on the 24th of June 2021 across all music streaming platforms. I am super stoked to have gotten featured by ‘Times of India’ and ‘Miss Malini’ for my third Hindi single “Keh Bhi De”.

It has been a memorable journey so far and I intend on making a lot more music and memories. Even during the pandemic, I could gain perspective to work harder and learn better. However, it has been quite a while since I last sang before a room full of people cheering and humming along. I have always been a performer and wish to do that soon enough. There have been times when I have been low, but writing, singing, and listening to songs have been my one true respite.

Lastly, if you do something you love and are passionate about it, you will love it even at your lows. So, go for it and let yourself shine brighter each day!

We hope this story will help you to find your passion too, share it to spread this ray of hope far and wide.

How A Street Dog Changed My Life Forever