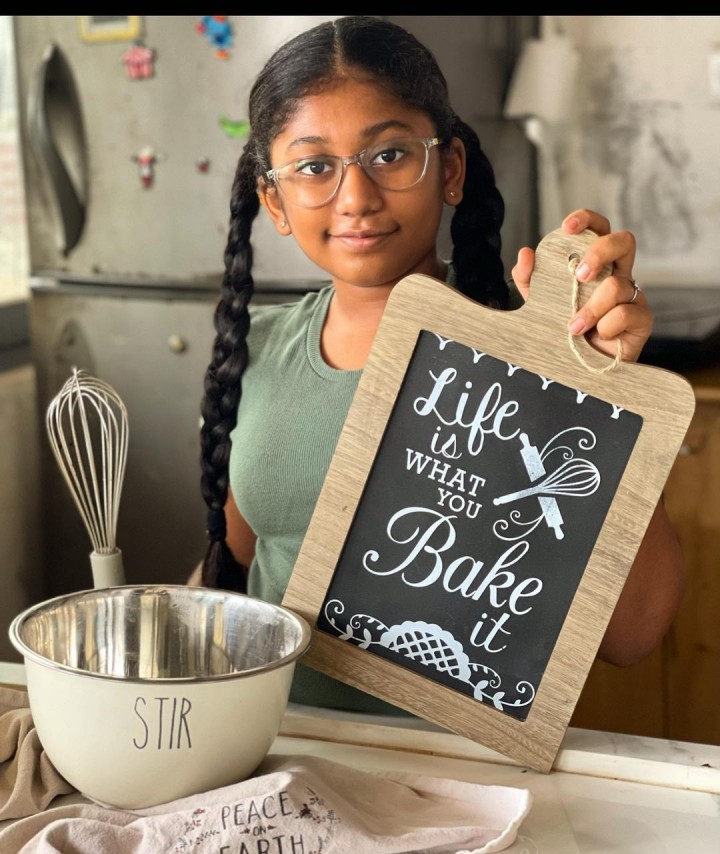 It feels so good to see my little angel, Jaaie, do a remarkable job at such a tender age.

Her journey from an ordinary schoolgirl to becoming 'India's youngest professional baker' has been enthralling.

It all started with her passion for baking. She was only 4 when she saw her father bake in the kitchen, and she used to admire the entire process. She used to sneak into the kitchen during the afternoons and experiment with baking. Due to the restrictions of using a flame, she used to try her hands at mug cakes and non-fire baking.

Slowly and gradually, Jaaie became adept at baking. With time, she gained tremendous practical knowledge of baking and experimented with different recipes. Looking at her efforts, I was blown away and ultimately decided to assist her in turning her passion into a profession. It was in the year 2020 when Jaaie was determined to level up her passion and start baking professionally. Then we designed a logo, decided on a unique name for the brand, and created a profile on Instagram to grow her business.

Then on, there was no turning back. Jaaie began to receive orders regularly. Jaaie baked and sold 110 cupcakes and 28 cakes in the first month. In December 2020, Jaaie received the largest order of 200 cupcakes for a hospital. With a little apprehension, she accepted it as a challenge and eventually succeeded, garnering widespread acclaim for her efforts.

She made us proud again by completing the largest order within 11 hours and setting a record in her name.

Jaaie's goal is to provide tasty and healthful cakes. "Little Baker'' was never intended to be commercialised, which is why no money has been spent on advertising. Even the logo was created with the idea that she is baking for others rather than herself.

Multitasking is difficult to expect from an 11-year-old child, yet my daughter handles it all with ease.

She competes with herself and tries to be a better version of herself every day.

She says, "There’s no competition for me. I provide products that are unique in their way. There’s no room for artificial food colours, fondant, or eggs in my cakes. I believe people should be paying for what they eat and not for fancy, unhealthy decorations."

Jaaie is devoted to baking without even the slightest hint of doubt or diversion at such a young age when the mind frequently switches from one interest to another. The intrinsic motivation that lets her sustain it when asked, she says, "I love it, and hence, I do it. Even if it is merely 4 cupcakes, I still invest as much of my efforts in it as I would if it were a 200-cupcake order. The best part about customers is those who reorder; the happiness that they want the desserts again really brightens up my day."

The mantra that keeps her going and sustained in such a competitive market is the one she has acquired from her father. He advised her to provide authentic and original products and never copy others because doing so would surely place her second. Jaaie has been named India's youngest professional baker and has a position in the 'India Book of Records.'

She also owns a spot in the 'Asia Book of Records,' for baking the most cakes in a day as a youngster. Aside from that, she is a trained Kathak dancer who has represented India in France and has cleared the Trinity School of Music, London, test up to grade 2.

Jaaie believes in donating because if God has given one so much, then one should definitely pay it back to society. God has blessed us with a hard-working, lovely daughter.

She is just 11 and has made us proud many times. Except for her success, what else would I ask for?

This Children's Day share your #justlikeyourchild story with us!

Here's How I Started My Brand "Ghar Aur Bageecha"

I am grateful for my patches-filled life.