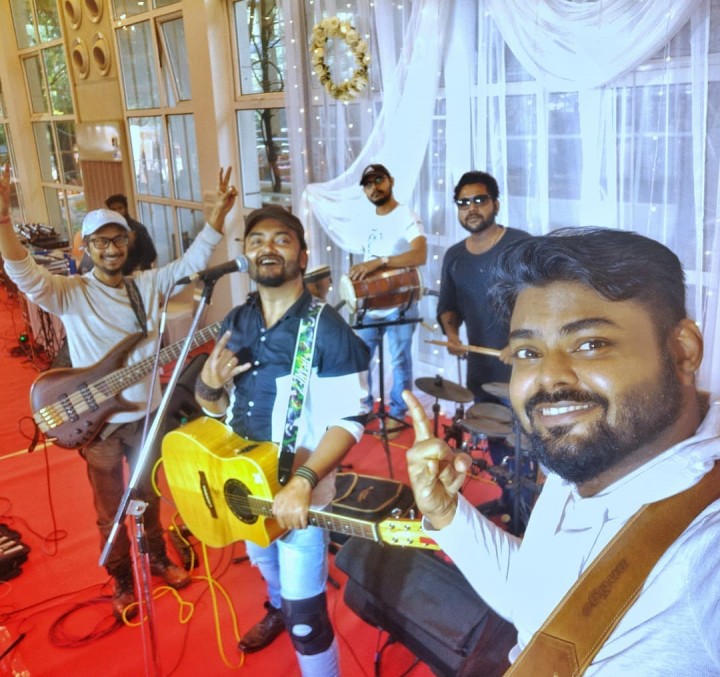 Our culture and upbringing have always incorporated music into our lives, as we are "bongs." All of us come from musical family backgrounds.

Our families have always encouraged and supported us to work and contribute something new in the form of art to society. Hence, we all plunged in and formed our music band, naming it "Oxygen," but it didn't continue for long since we all split up for professional reasons. The only thing better than a union is a reunion. In 2015, our band reunited in Bangalore. This time we were more passionate than ever.

We decided on "Oxygen On The Rocks" as the name of our band where 'Oxygen' represents life, and 'On The Rocks' implies undiluted. Every one of our original songs conveys a unique tale of life.

We have always drawn inspiration from bands and artists that have made an effort to establish a standard for independent music by sharing their stories. We performed our first show at the Phoenix Market City courtyard in Bangalore. It has been one of the most memorable shows as the band, by our short rocking performance, made a statement: " We are here to make a mark."

Being an independent music band is not an easy task. There are countless challenges which we face now and then. The major hurdle for us is 'the mindset of the audience.' In a country like ours, getting ourselves heard by the right audience and then getting liked by them is like moving a mountain. Our biggest competitor is mainstream movie music(e.g., Bollywood), which has all the necessary resources to reach a mass audience. That is where independent music bands with limited resources fail to break the ice.

The OOTR band is just roughly seven years old on the superficial level. However, our path to music began when we were children, studying different instruments, practising, training, and performing.

It's been a difficult journey. It's like the life story of Chinese bamboo, where it takes longer to grow its roots beneath the earth, and all we see is how it rises upward.

At one of our events, MTV fame Rannvijay Singha praised us in front of a big crowd and said, "OOTR is one of the best bands he has ever seen performing live." That made our day. From that point on, there was no turning back as we swept the Garden City with original songs, Desi rock covers, and more than 400 live performances to date. We wish to continue communicating our tales via music to people of all ages and resurrect India's lost period of independent music. We want and aim to make history in the music industry.

Persistence is essential! Keep your head in the game and work on the music you love, but also continue to write music. One day, people will connect with you, listen to you, and adore you!

Here's How I Started My Brand "Ghar Aur Bageecha"

Cheers to 40 Years of Friendship!

From A Doctor To A Patient, The Pandemic Tested Me