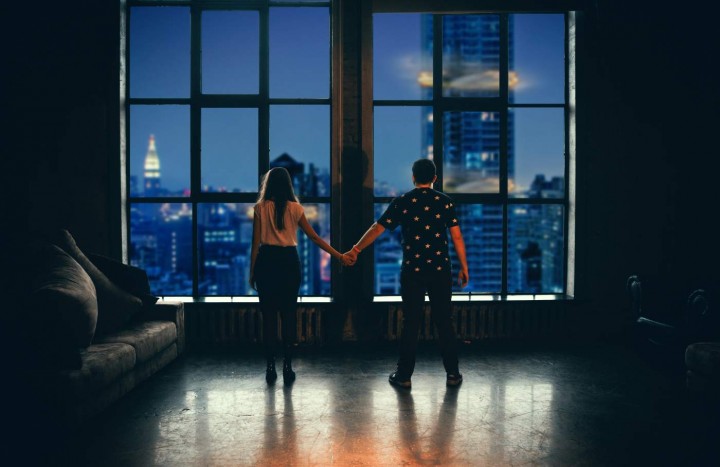 Christmas night was eventful, in the sense, my partner and I got all cozied up in bed, wanting to do the special dance that two grown-ups do when they're in love; eventually leading to a disproportionate spike in birth rates around September.

But what was supposed to be naked grunting ended in complete vulnerability about expressing our sexual needs.

We have the exact same circumstances as any two people who know they're spending the rest of their lives together. We can't begin to imagine how we're going to spend the decades stretching ahead of us. We've been together for over two years, and it was over in the blink of an eye. Most of my former romantic relationships would begin to groan under the weight of the boredom around the 12-month mark, and I can't even acknowledge time flying with this relationship. We must be doing something right.

I look at him and I know. I simply know that I'm going to the grave with this one next to me.

Yet, I don't know if we'll survive the brutal uncertainty of the time that will elapse in between. We now have some vague idea of where our career and ambition will take us in the world. We're certain we don't want children of our own. We're certain we will live apart from one another several times, for a few years at a stretch. While I can't say we're 'hungry' or 'driven' in the workaholic sense, we know we won't rest until we've impacted the world in big ways.

So, circling back to Christmas night, when we finally planned to have sex, an overwhelming grief took over me. Here we were, the best couple in the world, and we didn't have the luxury of having spontaneous sex. There is no hunger in our eyes, and for the fleeting second it does appear, the other person is lost in their own world.

"I want to have SEX," I said with some unnecessary emphasis, and this man knows me so damn well, that he completed my sentence for me, "... outside this relationship. Correct?"

I sighed deeply and said, "Yes. Does that make me horrible?" He looked at me. I've never once pretended to him that I'm even remotely capable of monogamy. I don't believe it's possible. COVID or no, he has always been travelling, and I'm always packing enough condoms in his luggage because he ain't getting any from me. Might as well get it when he has a few hours off, from whichever enthusiastic woman he finds on Tinder.

He looked at me again, his eyes fixed to mine. There seemed to be a little question in his: "Am I enough?"

And I know that there is no point having any type of "open" relationship if one of us is wondering if we're adequate for the other. Culturally and socially, we have no learning about how different types of romantic relationships can function. We have just the one script- monogamy. Sink or swim, we know that script by-heart.

One of my favourite things to do with him is lie down next to him in bed and just talk. So we talked. A lot.

In our conversation, we saw that we are each others' best friends. There is nothing that we can't share with each other. We read everything about each other. When he happens to bump into his ex-girlfriend, I tell him he should be with her, listen to her, and not hold back his affection. When I'm at my wit's end about being able to pay my monthly bills, he puts all his work aside, sits with me, and works out ways to collect pending payments from my clients. Despite all that, we don't know how to read each other sexually anymore.

I once watched a random TED talk that said that every couple who wants a long-term relationship must learn how to restart it over and over again. We are not going to be the same people from day-to-day. And we are truly committed to discovering each other ongoingly. He and I will keep falling in love with each other. And the whole sex thing will come back. Until then, our bodies need food-water-sex like anyone else. We don't hate each other for not eating home-cooked food every day, so why deny the rest? As long as we're using condoms, getting tested regularly, and absolutely not planning on starting families with other people, this works for both of us.

Maybe we're just too lazy to do the "right thing". Maybe we're just entitled millennials bending the rules. At the same time, I don't see why we can't make our own rules. In our relationship, we don't stop being sad until the other person is truly happy. I find happiness when he's happy, wherever he is, whatever he's doing. And it's the same for him.

And that's enough for us.