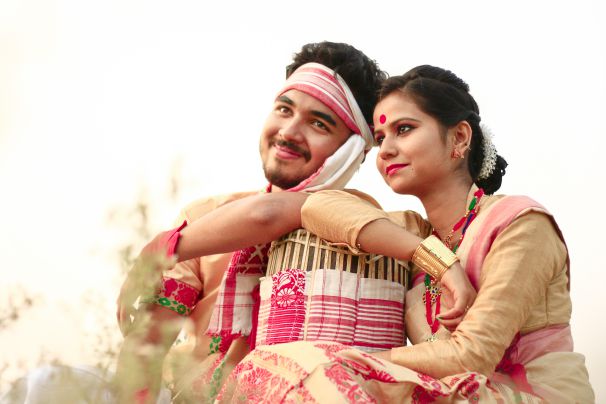 They knew each other since graduation days. They were from Guwahati. She was 2 years junior to him. There was something about her that he could not let go. Few months later they started chatting and what better medium than WhatsApp. Never did they speak to each other when in college. But instant messaging was always going on even during classes. He completed his graduation and moved to Delhi. They lost contact but he got her call on his birthday.

The number being displayed brought a smile to his face. It was she who was calling him. They spoke for a minute or two. But that made his birthday the most special one.

They got in touch again and soon started talking day and night. It was on 3rd of February that he saw a message on his cell phone after classes. It read "I love you". It was all that was needed to be said. They embarked upon a new journey and their relationship began. He visited Guwahati to meet her. They met, spent time together and got closer.

Everything was as if it was out of a fairy tale. But one unfortunate day, her family came to know about them. They were dead against them, reason being "He is a Bengali boy and she is an Assamese girl.” He tried his best to convince her family but there was no hope. They broke up.

Love is something that cannot be bound. It was her birthday. He flew down for just a day to celebrate her birthday with her. She was all that mattered. He planned a surprise birthday party and kept it a secret with the help of her friends.

Cut to the party, he entered the restaurant and she was smiling. There were tears in her eyes. They patched up. It was "Us" again.

As fate would have it, her family came to know about them again. This time it was brutality upon her. They started physically abusing her. Her life was made a living hell. It was the 1st of January, almost a month from their 1st anniversary. His phone started ringing. She was calling him. He was excited to hear her voice.

He picked up the call. She started speaking and sobbingly said, "We are over. We can't be together anymore."

The world came crashing down on him. Everything went blank. Tears started rolling down his cheeks. He lost all hope and couldn't keep himself together. He cried his heart out that day.

Few weeks later, he convinced himself that all he wanted was her happiness. At least then, she would not face any abuse and be peaceful.

It’s been 3 years since then. They are still in touch. There is so much love but they know that they've got no future together. What is their mistake? Was it his mistake that he was not an Assamese guy though he was born and brought up in Guwahati? Was it her mistake that she saw him as her prince? Was it their mistake that they fell in love? Is the difference of language a big enough reason to destroy the happiness of two people?

These are a few questions for which I am still looking for answers. Because the guy in the story is me and I cannot be with the girl I love. She means the world to me and always will.

Believe It Or Not, The Seed To My Success Was Sown By My Father's Maruti 800