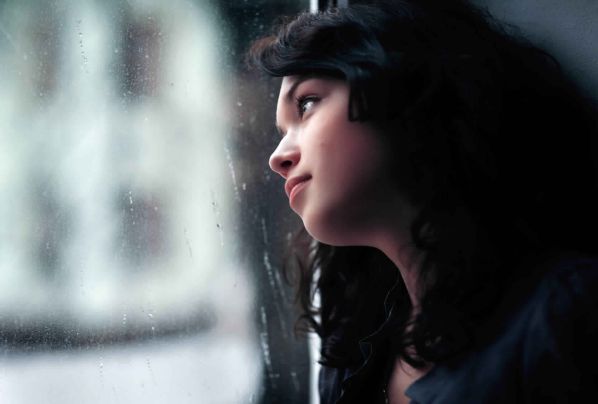 It was a short meeting. All of a sudden, the girl woke up when she realized that someone was gently stroking her feet. She had hardly slept the previous night and the coach was cool. She did not realize anything immediately but she saw a smiling face. Actually, it was the same face she had seen while boarding the train. The first thing that came instantly to her mind was, ‘So, that foolish idiotic guy had to sit just opposite to me!'

But the mesmerizing bright smile gave her a feeling of elation. She had a blank expression on her face. So he gestured to her with his eyes and asked her to look back. When she did so, she found the ticket collector standing behind her. He was asking for her ticket.

She unplugged her earphones that she had been wearing all this while and hurriedly fumbled through her handbag to find her ticket. While searching for the ticket, she dropped her sunglasses and a few snacks. The ‘foolish’ man helped her by picking up the things that she had dropped.

He had the same smile on this face even now. After thinking for some time, she smiled back at the man for the first time. He somehow did not look foolish to her anymore. In fact, he looked quite well mannered to her now. They chatted about their lives and the girl felt at ease with him after some time. They talked for almost an hour. The coach was almost empty. After a couple of hours, a few passengers started getting into the coach. A newly married couple and a few men got into their coach.

The man suddenly got up from his seat and sat beside the girl. She felt an unusual sense of happiness when their bodies rubbed against each other. She wanted to smirk at him smartly but she restrained herself.

For the first time in her life, the girl took the initiative and asked him his name. The man understood her reticence and told her that his name was Zamaan. He disclosed other details about himself. He said that he worked in Saudi Arabia now but was an Indian by origin. He also told her that he was twenty-six years old.

The man did not ask her anything but the girl told him that her name was Roohi and that she was a student of medical science. She said she was travelling home for the Diwali holidays. Zamaan said he too was doing the same thing. Roohi was hungry after a while. She took out her lunch box which was filled with some delicious creamy pasta and chicken.

She told Zamaan that she would not share her food with him at any cost. She said she had two reasons for this. She said that she was aware of how burglars mixed something in the food when it was offered by strangers. They then disappeared after taking away the belongings from the innocent co-passengers. She then said that sometimes some immoral people took the food offered by good samaritans. They then act as if something happened to them. Wicked men belonging to similar groups would then go on to demand compensation from the so-called ‘victim'. She then said that actually, the food was utterly delicious.

The man laughed at her when he saw her expressions and listened to her narration. Soon the railway attendant brought the bedrolls. Zamaan had to follow some kind of religious ritual, so he did not eat anything. He asked Roohi if he could sleep for some time. She nodded reluctantly and gave her assent.

Zamaan slept on the middle berth whereas Roohi slept just below him on the lower berth. Roohi was way too excited to sleep. She wanted to talk with Zamaan again. Again she wondered about how the ‘foolish’ man suddenly seemed to ‘fascinate’ her.

She checked her watch frequently and calculated the time that was being wasted. She tried making noises so that Zamaan would know that she was awake. Zamaan did not respond. She tried sleeping for some more time. But she could not.

So she suddenly rose up and touched Zamaan’s feet. To her surprise, he looked up and saw her as soon as she touched him. Roohi apologized for waking him up. Zamaan’s reply made her smile. She also wanted to hit him playfully. He said, “It’s okay that you woke me up. I was hoping someone would wake me up before I reached my destination.” Both of them laughed heartily together while everyone else in the coach was fast asleep.

Roohi loved being in his company. Suddenly she murmured something. This astounded Zamaan. He asked her to repeat what she had said. He wanted to make sure that he had heard her correctly. Roohi said she wanted to kiss him.

Slowly, Zamaan took her palms between his palms and exclaimed that he too felt the same way. Only one thing had stopped him from expressing himself. He was scared of ruining the impression that he had made on her. He wanted her to think of him as a serene and understanding person. He hoped that this was the image he had created in her eyes in such a short span of time.

Roohi’s destination was just a few moments away. But for the first time, she did not want to go home. She wished time would stand still for her. It was Zamaan’s time to have his supper after he broke his fast. Both of them did not want to alight from the train. They felt bad that they could not even say goodbye to each other in a proper manner.

Zamaan helped her with the bags and went back to follow his rituals. Roohi sat and waited for the train to reach her destination. After a while, Roohi realized that the train was not moving. Soon, she came to know that there was some kind of complication in the engine. So the train would not move for the next half an hour or so until the fault was set right. Roohi immediately considered this as God’s grace. Luckily the train took another one and a half hours to reach her destination. Zamaan had already come back by then.

Before leaving the train, Roohi and Zamaan hugged each other very passionately. Neither of them looked back.

They had not exchanged their phone numbers. Zamaan had begged Roohi to give him her number. But Roohi said, “Zamaan, you are way too foolish. So I will not give you my phone number."

But don't worry. They got in touch on social media!

Yes, love at first sight can happen for a few fleeting moments with a complete stranger too. Share this story because when we look back on such unique experiences, we are bound to have a warm smile on our faces.

I'm Rituparna a student of English Literature. I'm pursuing my masters degree in the subject. Writing is what I rarely do but then sometimes I just love writing.

A Love Letter To Anuv Jain: Hope You're Reading This