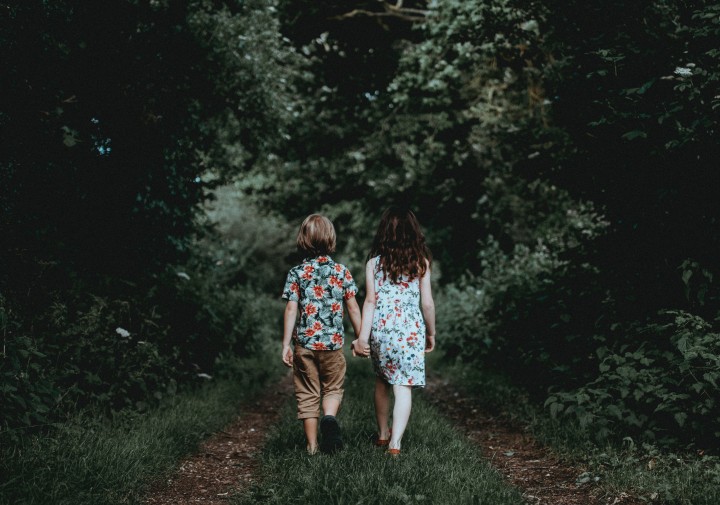 Today the bit of my life I am going to share with you people is about Aditi (name changed) who is my childhood friend. The fondest memory of my life.

I knew Aditi back in the days when we were just kids and all we had was innocent friendship for each other, despite what genders we belonged to.

Aditi was a geeky girl back in childhood. She used to have braces. She was clumsy and introverted. She was quiet and often bullied for her geekiness. We had a gang of friends and Aditi was a part of it too. Our gang members always came to her rescue whenever someone bullied her. We all used to have a lot of fun, played a lot of games together. Most of us were enrolled in the same school too and Aditi was my classmate as well.

Besides being my friend, Aditi was kind of an extended family. We belong to the same community. She is a relative of my mami (my mother's brother's wife, that is our own Mamaji's wife). Aditi's family is quite known amongst us all. Aditi and her family suddenly decided to move to their native place.

We were living in Delhi then. I think we were in eighth grade at that time. I clearly remember that Aditi and her parents came to my house before they were leaving to bid goodbye. She gave me a huge smile and she was teary-eyed. She hugged my elder sister tightly and cried, "I am going to miss you and your pampering." That was the last time I ever saw her.

The only news or anything we heard about Aditi and her family was of course through our Mami who used to live in the same city where Aditi's family moved to. We also belonged to the same place. My family and I used to visit our Naanka once in a while during holidays, but none of those times we had met Aditi.

So when did I meet Aditi again? It was exactly after four or five years after she left Delhi. After high school, my father asked me if I am interested in pursuing education in the South, in our native place, in my naanka. He said it will be better there as the engineering colleges' cost would be reasonable for us down there. My mamaji gave my parents this idea and they felt it was reasonable. So, I moved to Mamaji's place.

I gave an engineering entrance exam. I was enrolled in a college and was studying engineering. It was during that time, I guess in the middle of my first semester, we had to attend a wedding from my mami's side of the family. We all were at that wedding, I was just bored with all those nosy middle-aged people questioning my education and that's when I saw a girl who was sitting in a group where my mami and rest of her relatives were chit-chatting, the ladies gang.

My eyes were surprised to see her. I could recognize that it was Aditi but she had changed drastically. She was looking so beautiful that time in that traditional outfit. When I am saying 'beautiful', do not take that as an understatement. Her braces were out. She had put on some weight and she was glowing like an angel. I was stunned at once, looking at her. I made my way to her. My mami saw me coming and she introduced me to her relatives who did not know me, and then she introduced me to Aditi and said, "I guess you both know each other right?"

Aditi was surprised. I guessed she recognized me. She jumped in joy. She held my hand continuously shaking it, "Abhiiii" (changed name) she shouted aloud. She immediately asked me about my parents and my sister. I said my parents were in Delhi and my sister was married and resided in Bengaluru. She said she knew about me studying here and that I was staying in mamaji's house, but somehow she just could not meet me.

She immediately asked me for my contact number and texted me hers. She asked me to be in touch and since then, she has been in regular contact with me.

Aditi was no more the introverted geeky girl I knew once. She turned out to be bright and talkative, bubbly. I guess she has learned to be confident.

She now used to frequently visit my mamaji's house with her family knowing I was staying there and she also took my sister's contact number and called her once in a while. She was into her graduation. She had a couple of good friends. She was doing well in her studies, had a lot of ambitions.

She was always in good spirits until the wrath of a person in her life. Aditi was in love with her high school classmate. This particular guy whom I am mentioning is egoistic. He controlled her. He played with her feelings. We all could see it, me and her close friends, but it was Aditi who was living in denial. This is just a brief incident that I am mentioning.

The series of events that she put herself through in blind love for that guy was heartbreaking. She was in love with him, but he never treated her well. He said he cared for her, maybe he did, I cannot say that, but he started taking her for granted as time passed. Time flew by, I completed my engineering and through campus selection, I was selected in a company. Aditi was pursuing her post-graduation.

So in this time frame, I could see a drastic change in her personality. She was no more a bubbly girl I once knew. She stopped attending family functions mostly. She was not in contact with me much as she used to be. She was not paying much attention to her studies. Her parents were worried about her. I remember I visited her house once on her birthday and uncle narrated about that guy she was in love with.

Aditi's father has always admired me as he has known me since I was a kid. He knew that Aditi had shared with me about her love interest and uncle wanted me to guide her the right way. He said as we were the same age and friends, I may know what she is actually thinking and ease her discomfort about current situations.

It is not that Aditi has never shared any of her pain with me. A couple of times she did when she came to know her relationship with this guy was going nowhere and that she was stuck in her own feelings for him. I kind of started encouraging her in her sadness as I believed this would encourage her in this grief and if I started sympathizing with her in this she was never going to come out of her situation. I would tell her the harsh way that the guy was never going to be great for her as he never acknowledged her efforts, hoping that would drive her away from him.

I met that guy once on one of Aditi's birthdays. He is good-looking and well-spoken, but his demeanor was quite controlling towards Aditi. He never liked it when she came to me and we both laughed at things. Though Aditi mentioned to him that I was her childhood friend and she just respected and treated me like a friend, it still bothered him. I never gave it attention as these things and these kinds of feelings are common in relationships. Maybe because of him Aditi was not in frequent contact with me as she used to be.

Slowly, she stopped doing what she liked. Every time I called her, all I could hear was her cry because that person used to always hurt her with his harsh words. There was no chirpiness in her left. I came to know from her girl best friends that she even stopped talking to them much and he controls her a lot.

I wondered why an intelligent wise girl like Aditi was falling prey to some egoistic control freak.

I also could not do much as Aditi herself stopped talking to me and no more shared things. Every time I counseled her out of this or gave her a piece of advice that was not in her favor, she would avoid telling me anything about her relationship status, and hence I kept my distance from this topic.

Hello all. First of all, I would like to thank AkkarBakkar for being the platform to those who had no one to share their struggles with. The stories or the feelings which we do not dare to share with people in our lives, but we wish there is a listening ear who could listen to us without knowing our identities and AkkarBakkar has proven to be the best platform for many tale-tellers.

How I loved reading the author's note today. Every day, we learn a little more of what our readers and authors think about us and it makes our hearts do a little dance. Because why else did we make this platform? For everyday people to share their everyday stories.