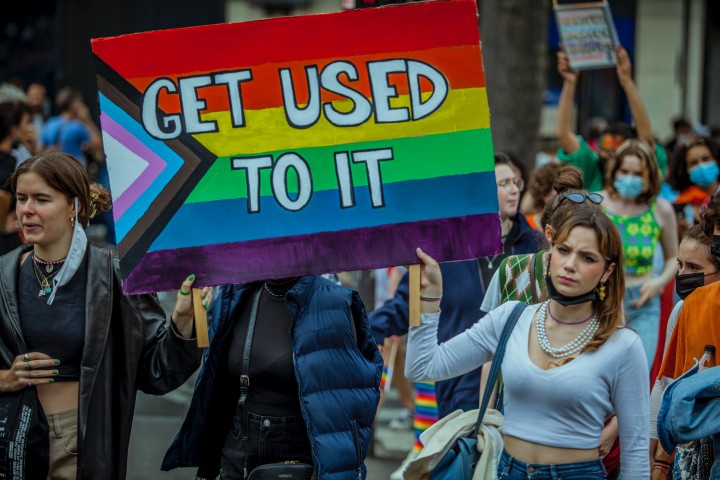 I am not here to talk about how many genders and sexualities are there and what do they mean. There are a lot of articles and videos describing and explaining them.

I don’t know how many different types of genders and sexualities are out there and I don’t think there’s a problem with it and I am not guilty. Because what I think is when we have acceptance and inclusive nature, everything’s fine.

So here's a few words from my side based on the little I know.

Gender: How people identify as themselves irrespective of how they are born and what people say. I guess how people feel and how they identify themselves can be very confusing and way too complicated even to themselves because there are a lot of external factors that affect the process.

We should at least try to make it simple and not complicate it further. We should look at the person as a 'human being' rather than what gender and sexuality the person has. I also think at the time of birth when doctors say that "beta hua hai or beti hui hai", at least when we become parents, we should be open to the possibility that’s just the biological gender.

Maybe in the future, the child might identify as a different gender and the acceptance should come from parents because they are the ones responsible for the birth of the child. We should at least have an idea of what transgender people go through because they are born as someone and identified as someone else.

Also, there are some people who have a gender that blends elements of being a man or a woman, or a gender that is different from either a male or a female.

Some people don't identify with any gender. Some people's gender changes over time. They are non-binary people and also have many different names. Ignorance is not the problem. Lack of acceptance is.

When someone says they are of a particular gender and we don’t know what it means, we can always ask them politely what it is and if we don’t want to know, we could just say OK. Sexuality: Which gender a person is attracted to. Homosexual, heterosexual, asexual, bisexual, pansexual, are a few of them.

Some things some idiots say when people talk about their sexuality: It’s against nature. I just want to ask one question.

And you dare question nature’s doings. You say different sexualities are against nature. Who are you to say that? What do you know about nature? You are an infinitesimal part of nature and what you know is far less than that. You don’t even know about yourself. Who are you to say that their feelings are wrong? It’s your feeling towards them that is wrong. Not theirs.

You questioning nature is against nature. Because you are also a part of nature. If you say that different sexualities are nature’s mistake, then it’s your mistake as well.

It is a disease. Eat some medicines: My response to them would be – It’s you who has a disease. You are phobic. You should get some help at least with some basic education. A man saying ‘Oh I can change that’ when a woman came out as asexual: that’s the most disgusting thing she could hear. You aren’t human.

God will punish you: It looks like people have become judges of nature and they also know who God punishes. How dumb it sounds. Let’s look at some of the sexualities and how great they sound.

Asexual: Sex is out of the equation and still is attracted to their person. How beautiful it sounds.

Pansexual: Falling in love or getting attracted to the person irrespective of their gender. We should actually wish that we were like that. Why don’t people think that being heterosexual is against nature and there’s something wrong with it? Because we are the ones who are gender-specific.

Gender and sexualities have become like caste and religion. There are different names. If we are open and comfortable and feel secure with our beliefs or who we are and also feel the same way about others, there’s no need for the names. The same goes with Genders and sexualities as well. Everyone likes someone else. Why does and how does it matter to others? Parents also are an issue.

Why does gender or who likes who matter to you?

Human being's body parts and their sexuality should matter in their own bedroom. Why should anyone else have any opinion on it? When people open up about their sexuality, it doesn’t mean that they are asking for your help in changing them. That’s the dumbest thing to think.

We always try to find a safe space. So we know who to open up to and who to not till we are comfortable.

Kudos to platforms like 'Indian Aces' that have created that space. Trying to bring awareness among people and educating them about different sexualities. Kudos to people who are coming out in the open and building courage in others as well to do so. Kudos to movies that have showcased honesty in telling stories about sexuality.

When I initially heard about other sexualities like lesbians and gays, I thought it was beautiful rather than vulgar and uncomfortable. I don’t know why but I am glad I felt like that. Sorry to all those who have gone through a lot, struggled a lot on the inside affecting your mental health over having something so very beautiful.

You might wish you weren’t different. But I hope you don’t wish that. I wish I was like you to say that more convincingly. Most people don’t deserve you. And it’s okay. It’s okay. We should rise above gender and sexuality. We should treat everyone as humans.

The kind of violence that’s been inflicted on some people because of their sexuality and gender is just unacceptable. Like people being raped so that their sexuality would change and the saddest part is parents are making them do that.

We should accept that we don’t know that there are many sexualities. You don’t need to love them, you don’t need to be friends with them. At least, do not be violent, abusive, disrespectful. Do I need to know about every gender and every sexuality to say what I am saying? No.

Everyone gets attracted to someone. And someone different. Some to intelligence. Some to looks. Some to your walk. Some to your likes. Some the way you talk. Similarly some to men, some to women. Some to both. And that someone can be of any gender. Whoever someone likes, whatever someone does, be accepting. We should be.

What if we start judging people? It can go in the wrong way. If I want to judge you, I can start judging you with whatever you do and how you walk, what you eat, how you eat, how much you earn. We have to look at people the way they are. Otherwise what happens is, I will tell you something.

There’s something called 'benevolent sexism'. I read about it recently. Suppose you are a girl and someone told you that women are emotionally strong beings and why are you not? See the kind of pressure it puts on her and it makes her even more vulnerable. It doesn’t make sense.

So we have to try and learn to let people be the way they are. We can always tell them (if we know for sure) how to do better in what they are doing rather than saying do something else. We are very normal as human beings. We are not extraordinary.

Most of us don’t know how to handle ourselves. So focus on yourself rather than jumping on others. We don’t even know about a drop in the ocean. Why do you think you deserve what you have by birth? Did you work hard before being born? Be kind to others.

Read about people like you, common people, their stories. Try to understand them. Develop empathy. Write about you. We don’t need extraordinary stories. Don’t only read about Swami Vivekananda, Mother Teresa, APJ Abdul Kalam to name a few.

Read our stories. Stories of people around us. The world is in desperate need of kindness, empathetic people, humility, people who listen. People who do not judge. We have to help each other become better people.

No miracles will happen and change the world. We should not talk about patriotism and love for our country if we don’t even respect and accept the people irrespective of their gender and sexuality and caste and religion. Because nation means people.

Hypocrisy is everywhere. Because people only like to talk about things but not actually do them. Most people don’t know the art of listening.  There are so many types of discrimination that exist.

There’s a dialogue from the TV series Brooklyn 99. It's for those who didn't watch the series but need to hear it. "I know things aren’t exactly where you would like them to be. But I promise it will change and get better. Every time someone comes out and tells who they are, the world becomes a more interesting and beautiful place to live in."

There are so many such things that people want to and need to hear from others. We need to use words of love, acceptance, assurance, bravery,  etc.

I'm Grateful I Put In The Effort To Earn This Title.