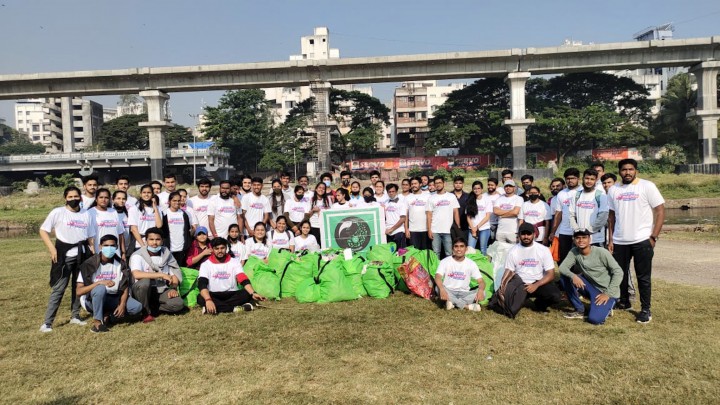 Started in Sweden in 2016, plogging is a combination of picking up litter while jogging.

Ploggers jog and pick up trash, thus making it a complete workout of squatting, jogging and bending. Plogging burns more calories than jogging and helps you clean the environment.

Initially, individuals used to do plogging alone as part of their workout routine. But, as its roots spread around the globe, more people started doing it.

I took up a 30-day plogging challenge in August 2019 to address the littering issue in the city while I was a part of the Clean-Up Mission. But, a colossal failure of these drives was the way the waste was being handled and treated. There was no segregation of the waste, because of which it wasn't easy to identify and understand how to recycle or reuse what we are getting. It also leads to the mixture of wet and dry waste, and sometimes non-decomposable waste such as tiny pieces of plastic gets hidden into the wet waste, which eventually will lie around unnoticed.

Disappointed by this, I was looking for an efficient way of focusing on an essential part of the trash that has been a significant cause of pollution; plastic. This made me create the Pune Ploggers community on the 2nd of October, 2019. The trash picked up during these plogging drives is collected by the local Municipal Corporation, local kabadiwalas, recycling firms and is used in making eco-bricks through our upcycling initiatives and used in some of our trash to treasure initiatives. Minimal amounts of trash that cannot be recycled or repurposed are then sent to landfills segregated.

Pune Ploggers is the first-of-its-kind community that transformed plogging into a community-level initiative working on weekends to rejuvenate polluted rivers and biodiversity-rich hills in the city. I call it a ‘Trash Hunt’ focusing on the idea of gamification, which is a simple deal of introducing gameplay in something which is done typically. Clean-ups with the addition of plogging, trash hunts and team-based activities have made it an engaging volunteer event.

We started in Pune, and now the country has seen community plogging chapters inspired and coordinated by Pune Ploggers in cities like Mumbai, Nagpur, Nashik, Aurangabad, Patiala, Ranchi, Kanpur, Kolhapur, Delhi etc. More than a million individuals from small villages to metro cities have been inspired by this small task force in Pune that started its mission with a small team of individuals that grew up as a nationwide plogging community! The plogging community is built on the values of equality, diversity, and inclusion. Many thorough processes have been involved in ensuring that each section of society is equally represented and that they feel included and safe. This has made the community more substantial, and today people from various professional backgrounds, socio-economic backgrounds are a part of this community.

Addressing mental health issues through plogging drives became an avenue we explored when we realized the lockdown impact on people who stayed locked in homes during the covid 19 pandemic. The team has been working consistently through ‘Volunteer from Home’ and ‘Field Work’ modes, thus being a support for our awareness and initiatives and the litter pickup drives.

The COP26 conference took place in Glasgow this year, and a rising wave of eco-anxiety has been observed among the youth of this country as well as nations around the world. Millions have been protesting the inaction of national governments around the world to commit to Net Zero Emissions. The Pune Ploggers stand on the value of action rather than activism because the notion of raising slogans while showing no potential to change individual ways of living won’t deliver the sustainable development we have been looking for.

While the government is doing its part by sensitizing individuals to transform their lifestyle that demands governments to act, it will help the environment in the coming years. Our communities will amplify protesters' cause by addressing the issue at a grassroots level, fixing mindsets of individuals, and helping budding minds from primary schools learn the greenways right from an early age.

I believe that “We are unlearning the way of life, relearning the sustainable one and being the barrier between the elderly and younger generations, to leave behind the righteous approach to life, which cares and protects mother earth.”