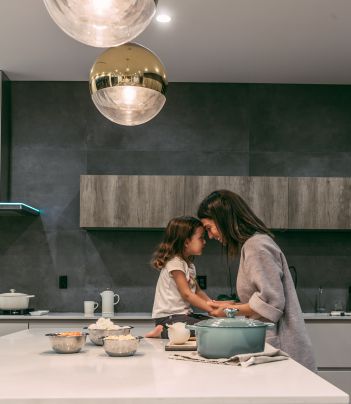 "And it's 9 pm again - time to serve the dinner!" As usual, she got 3 dishes and 2 bowls from the kitchen, served chicken curry in both the bowls and 2 rotis each in all the plates.

The third plate saw the smallest pieces of chicken with some gravy, neither served in a bowl nor with the beautiful juicy drumsticks. Nothing was different that day, this is how it has always been and nobody ever noticed or realised that something there required a change. But suddenly everything looked different and a little unjust when her 6-year-old spoke up that day.

She had opinions, at times quite sensible and strong ones and she wanted to know why were they all treated differently in such a small family of only 3 members - her dad treated like a king, she the princess and mum the maid. Her question came as a bolt out of the blue for both of them because they'd never given it a thought before. She wasn’t happy with the way her mum would cook, clean and do household chores all day and yet her platter looked different than theirs.

A woman is like water and she readily moulds herself in the shape and situation she is put in. Kindness and empathy define her. No matter how confident and strong she is, she herself doesn't know when and why she gets ready to sacrifice herself for others.

By OTHERS I am actually referring to the ones who are supposedly her closest, like her husband or in-laws and even her children. In an attempt to keep everyone happy, which comes to her naturally, she lets her dreams and desires take a back seat. Just to gift them one smile, she is ready to take the world by her stride and cross any barrier that comes her way. The only thing that matters to her is their happiness and she isn't scared of making innumerable unnecessary sacrifices for this.

But is she happy or feeling heroic about this? Is she doing it willingly, in all her senses? Or is she scared of being abandoned by her loved ones? Fear of being judged as an irresponsible wife and a careless mother also probably acts as a catalyst.

Where is that confident, outgoing and sanguine girl lost, the one who never cared about log kya kahenge, the one who knew her goals and the ways to achieve them? She wanted to change the lives of all the women she'd come across, she wanted to motivate them, liberate them and make them understand that they are worth much more than this, that they are humans and it's perfectly alright to be outspoken, aggressive and selfish.

She didn't realise when she turned into that woman as she lost herself totally in the process of winning over others.

Her eyes were moist, though she wouldn’t admit, her soul was bruised. She had nothing left for herself except for a constant yearning to find her lost self, to live the life of her dreams, to feel alive. She kept faking her happiness and contentment, not only to her family members but even to herself. But it was time she accepted and changed it. She had a daughter who would follow her blindly, knowingly or unknowingly, and this is what she was scared of.

She didn’t want to raise another HER but a woman of substance, who knows her worth well. And for this to happen, she needed to change herself first. She needed to set some good examples for her daughter to follow in the future.

Change doesn't happen in a day but she was finally determined to bring it in their lives. She started counselling herself, because who else on earth knew her more than she, herself. She kept talking to her dormant inner strength, persuaded it to leave the cage and come out, actuated it to face the world with aplomb.

It took her years, it was a very slow growth but a consistent one and finally one day she stood up for herself, head held high and voice loud and clear. She finally discovered herself, she knew her vigour and strength, she also learnt about her flaws and how to overcome them.

The world that looked like a prison all this while suddenly turned into an open theatre where she could write her own scripts and play her favourite roles.

She would often ask herself often - "What is this hullabaloo about women empowerment? What does it stand for? Is it derogatory or is it secretive? If the name itself suggests POWER then how can it be gender specific? Isn't strength a universal entity and every being on earth is entitled to this?"

And finally, she had the answer to all her queries. She now knew women empowerment isn't about changing how a man thinks but it's about changing yourself. It's learning to love and respect yourself because that is the only way to make others understand and support you. You get married to another human, a man to be precise who isn't God and unaware of your perspectives and goals and unless you tell him about yourself, he is going to treat you the way he thinks is right, which might be exactly opposite of what you expected. So it's important for us (WOMEN) to keep our visions clear and try and make others respect it.

Everyone is born special and it will be an injustice to underestimate oneself. To keep your near and dear ones happy, you first need to be happy yourself. Forget what the world thinks, it will always try to pull you down but it's totally up to you to know and believe that the entire universe lies within you. You can achieve anything with your indomitable spirit only if you let go of your fears and inhibitions.

Apart from being a Digital Media Editor and a mother to a very naughty7 years old girl, I would love to introduce myself as a thinker and dreamer who writes on topics that touch her soul.

I Quit My Corporate Job To Empower Women: It's The Best Decision I've Ever Made