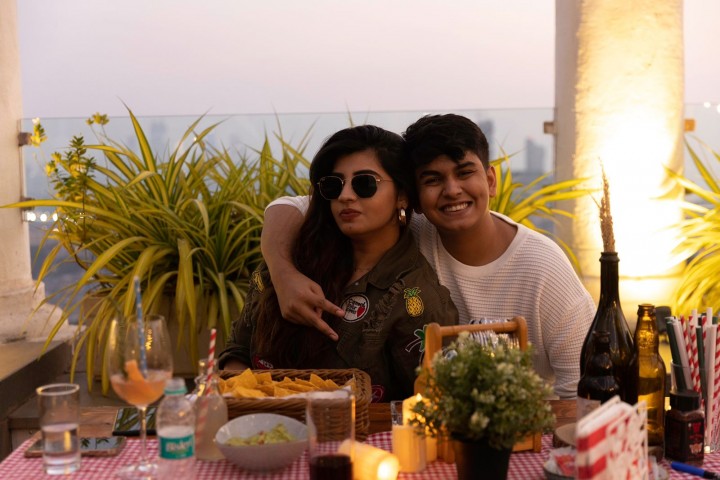 I fell in love when I was 20 years old. I admired him so much that I decided to marry him.

After our wedding, we flew to Dubai. As time passed, he began to reveal his true self.

He used to beat me for pitiful reasons.

I attempted to deal with it, thinking that since I had agreed to marry him, I would have to endure the brunt of it. In that house, I was like a lifeless body. Every morning, I prayed to God that I wanted to die.

I was all alone there. Despite being aware of the situation, his parents constantly supported him. 'Don't worry, everything will be OK when you have kids,' his sister said. I got pregnant within seven months of our marriage. I thought that now he would change, but nothing much happened. Instead, he used to abuse me physically.

When I refused to go out to dinner since I was unwell, he shoved me against the bed, landing me back in the hospital! I was diagnosed with depression and had no minerals left in my body. My health was deteriorating, so the doctors urged my husband to send me back to my hometown. Fortunately, he agreed after a lengthy and heated debate.

When I got home, he called me and began assaulting me. I couldn't take it any longer, so I filed for divorce. Then he sent me a legal notice asking for custody of my unborn child, but I was certain I did not want to have any more contact with him.

I fought for six years and eventually obtained custody of my young child.

I became a fighter when I had to battle for the custody of my child because I didn't want to lose the case at any cost. I wanted to protect my son from a man who was wild, cunning, and a criminal. This man literally oaks me. I never wanted my child to grow up under him.

My father has been my best ally during these difficult times in my life. The worst part of my relationship with that man was when he used to abuse my close family members, especially my parents. In short, he wanted to torture me, so he abused my parents to satisfy himself. I spent the worst nine months of my life with that person.

Winning custody of my son gave me a lot of confidence, and as a result, I am now so outspoken about marital violence on social media.

Domestic violence wasn't even a thing, or at least very little of it, sixteen years ago.

So I had to confront it all by myself. Although many individuals are raising awareness about the same issue, still only a few women can speak up for themselves. That is where I felt compelled to express my thoughts on the subject. This thought comes to me readily since I've lived through it, and no one else can comprehend what I can.

It took five years for me to recover from that emotional trauma.

With the passage of time and a lot of self-doubts, I made a comeback. That damage he caused years ago is still present in me now, but it simply makes me strong and more confident. Whatever he has done to me is horrifying and torturous. With time, I learned to deal with emotions because of the emotional abuse I had to suffer, but that never made me weak; Rather, it made me more confident in dealing with the world outside. Emotional violence is unseen. Only an individual who is a victim of it can feel it.

My advice to all the women suffering in silence is to rise and fight for yourselves. Defend yourselves! Nobody will take your side unless you make the first move. Bearing all of this for the sake of marriage or society is not justified. If your partner slaps you, smack him twice. If he threatens you, don't give up; Instead, stand tall and confident because it is your spouse who is wrong, not you.

We, as women, are conditioned to respect our husbands even if they beat or abuse us. It's a frequent thing in society, which is unacceptable, and we women need to halt this revolution in society by taking a position so that our future generations don't have to endure it all. In the end, we are also humans and are not subject to such abuses.