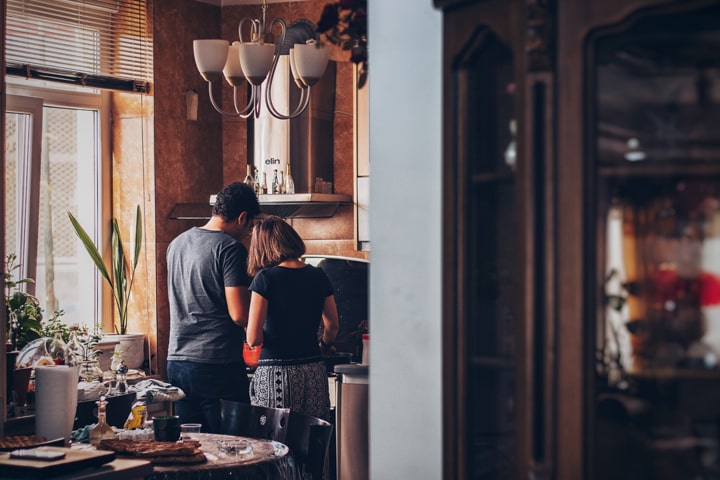 "I can't take this anymore! Do you understand? I can't stand you in the house anymore! If we stay indoors together any longer, either you die or I die! So you see, we die either way! Hence, I am going out and please don't bother to call or look out for me! I will come back if I feel the need!"

Before Prakash could even react or reply to Gayatri's words of rage, he heard a bang on the main door from the bedroom. He could make out from the loud sound that she had already left the house. He sat on the bed with both his hands on his face with frustration and anger. He took two deep breaths and suddenly shouted out, "Aaaaaaahhhhhhhhh," to vent out his grievance.

Later in the night, Gayatri returned and found the dinner on the table neatly covered with a plate and Prakash in the study with the lights switched off. It had been a month since he was sleeping in the study and not in their bedroom.

Gayatri went into the study to find him sleeping soundly on the couch. His slender body being visible in the warm yellow light, she surprisingly found it quite aesthetic. She switched off the lights and tucked him with a blanket since it was quite cold in Edinburgh that day. She came and sat on the dining table and tears started rolling down her cheeks. As much as she tried to control it, she just could not stop sobbing. She cried the whole night and slept on the table itself, without having her dinner.

The next day, Gayatri was woken up with the sounds from the kitchen. She went in and found Prakash making tea. They exchanged quick glances and wished each other "Good morning" cordially, like distant acquaintances do.

Gayatri asked Prakash quite formally "How’s your back pain?"

Prakash replied quite nonchalantly, "Yeah. It's ok. Why do you ask?"

Gayatri shrugged her shoulders to show her casualness too, and said, "No. You are sleeping on the small couch in the study for some time now, so I just thought of asking if it's affecting your back."

"Oh, that’s fine. Anyway, I don’t have any other option. Gayatri felt a crippling affliction within but still she strongly replied,"

"You very well know I tried moving out previously also, but now due to this lockdown and Coronavirus, nobody is offering the room on rent and all the hotels are closed. I don't have any place to go to- please bear with me and give me some time."

Hearing this Prakash said, "I have never asked you to leave the house, Gayatri, and trust me, as much of a villain you think I am, I would still never ask you to leave the house which we both built and nurtured with our dreams and desires." Saying this, he left the kitchen with the breakfast tray, and said "Please have your breakfast Gayatri, you didn’t even have dinner yesterday. You will fall sick if you do not have your meals on time. I have made tea and breakfast for you too."

For the first time in two months, Gayatri blushed hearing Prakash's concern for her. She smiled a bit awkwardly and said, "Okay, come let's have breakfast."

On the table though, there was only the sound of clashing knives and forks, as if two strangers were sitting together for the first time. Gayatri and Prakash were used to this life. It all started two months back when she suffered a miscarriage because of Prakash' s drunken driving. They had both tried very hard to have this baby through IVF. After that night, when Prakash suffered a minor accident resulting in the miscarriage, it was as if all their dreams and aspirations were shattered and washed out with the foetus inside her.

From that day onwards, however much Prakash tried to mend things and apologise to Gayatri for his grave mistake, she just couldn’t get over the agony. Whenever she looked him in the eye, she could not forgive him. So, gradually they both became bitter, depressed, inhibited and unfulfilled people. In these two months, they had been busy with work and office and seldom interacted with each other.

They even thought of separation when they got too frustrated of tolerating each other.

Amidst all of this, came the terrifyingly contagious corona virus, which proved to be a health threat to the world and which seemed to be intensifying the fear in every individual with the increment in death count. This forced the entire world to be at lockdown to stop the community spread. Closure of offices, malls, movie halls, restaurants and the stringent rules of the government forced all people to stay indoors. Gayatri and Prakash were no exceptions to this rule. It had already been 5 days since they were also forced to tolerate each other, the whole day long.

On the previous day, after a long time, they spoke to each other which lasted more than 5 minutes. Yes, it did end up in a fight but still the positive was that they could at least speak their hearts out for once since that painful incident that changed their lives forever. It seems that they both recapitulated these memories while having their breakfast. Tears started falling again from Gayatri's eyes. Prakash put his hand on hers, first time after many days, and wiped her tears with the other. Gayatri also did not oppose this behaviour of his, this time.

He said remorsefully, "You know the situation outside. Its all so grim and dark. We have to live together, work together, save ourselves from the deadly disease together, how can we do it if you don't even want to talk to me? Scream at me, slap me, throw slangs at me, but at least speak to me! This is my only request to you. I can't bring you back what we have lost but I can promise to make it up to you in whatever way you want, if you allow me to."

She became thoughtful and seemed to have absorbed what Prakash wanted to say for the first time after months and got up from her seat and said, "I will cook tonight. We will have dinner together. If you are fine with the idea." Prakash smiled sheepishly and nodded in agreement. This was maybe just the beginning of their new innings together, which had been forced upon them with the nationwide lockdown.

Everything has its own positives after all. When the whole world is lamenting on the current situation, the exponential spread of the disease and the people dying from it, this couple, far from the hue and cry of the people across the world, was celebrating the comfort of being partnered together for a lifetime. They are few of those privileged people who made an attempt to unmask themselves when the whole world is guarded by a huge mask.

This quarantine period gave them time to reunite with each other and set new commitment goals together, which will remain as a cherished memory for them long after the isolation phase would be over and normalcy would prevail again. Hence, lets enjoy the little pleasures of confinement and keep the love alive within us.

In Hindu Mythology girls were declared as goddess but what we are doing. We are putting them in darkest in our own homes.